Senator Allan Peter Cayetano is now the official head of the Department of Foreign Affairs as announced by abs-cbnnews.com.

Senator Panfilo "Ping" Lacson, the chair of the CA Foreign Affairs Committee, endorsed Cayetano's appointment after what he dubbed as "probably the shortest public hearing" on Wednesday.

The motion for Cayetano's appointment met no objection, making him the official Secretary of Foreign Affairs. 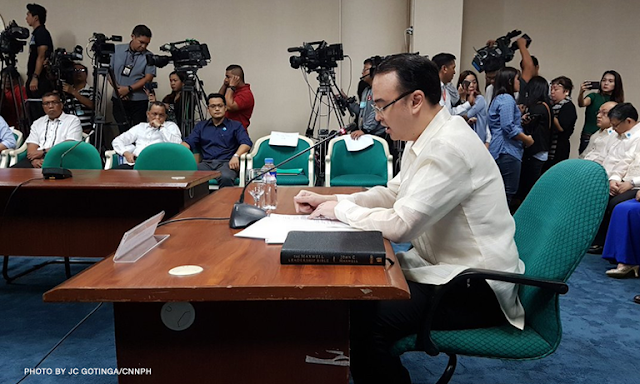 cnnphilippines.com said that President Duterte had signed the appointment letter before his trip on Cambodia, Hong Kong, and Beijing.

"I signed an appointment (letter) just before I left my room and I saw the name of Senator Cayetano... FA," Duterte said in a media briefing at the Ninoy Aquino International Airport before leaving for a six-day working visit to Cambodia, Hong Kong, and China.

inquirer.net on the other hand noted that the post has long-been reserved for Cayetano.


Mr. Duterte earlier said he would give the foreign affairs portfolio to his defeated vice presidential running mate, Sen. Alan Peter Cayetano, after the expiration of the one-year ban on the appointment of losing candidates to positions in the government.

Abella, however, declined to comment when asked in a press briefing on Thursday if the top diplomatic post had been promised to Cayetano.

With the confirmed appointment, the senator will replace the acting DFA chief as stated by philstar.com.

Meanwhile sunstar.com.ph posted Cayetano as he give his gratitude to the Commission of Appointment for a swift procedure.


Earlier in the day, Cayetano's nomination was approved by the CA committee on foreign affairs in less than five minutes.

No member of the panel opposed the appointment of Cayetano.

"Thank you for giving me the honor of breezing through the Commission on Appointments. I'll make my commitment to you today, I will do my best para hindi po kayo mapahiya," he said.